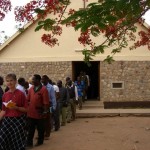 Even though Elizabeth and I have not been to Tanzania yet (or anywhere in Africa, for that matter!), we still want to showcase where we hope to live and work. Once we arrive in Tanzania, we will be sure to chronicle our journey with regular photo gallery updates. In the mean time, please enjoy these photos we have borrowed from others who have lived at the seminary. Please click on an image to enlarge the picture and view the caption.