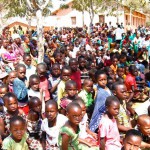 In Tanzania, no one is eager to return home from church for NFL kickoff or a coveted brunch reservation.  Church is the main event, and it is an all-day affair.  Last Sunday, Elizabeth and I accompanied three other American missionaries to Mvumi Makulu, a large, relatively prosperous village about an hour’s drive from campus over bumpy dirt roads.  This was our first real immersion into African Christianity, and it was certainly an exciting experience.  This particular Sunday was a special day, since the parish priest, Father Daniel, was leaving his post to come to Msalato to study for his Bachelor’s Degree.  The service lasted well over four hours.

Before the service, we were welcomed into Fr. Daniel’s home for chapati (a traditional, delicious flat bread) and tea.  Village children were continually peeking in the door trying to get a glimpse of us without us noticing.  When we caught their eyes, they would bolt away giggling.  Later, when we were taking pictures, the children all pushed their way to front trying to get into the picture.  Since mirrors are rare, our digital cameras offered some of them the first glimpses they had ever seen of themselves.

From the very beginning of the service, music and dance took center stage.  Since it was Fr. Daniel’s last day, choirs from all five of the churches in his parish attended.  With so many people, the service had to be held outdoors.  Women’s choirs and youth choirs took turns performing lively song and dance.  Every song told a story, though we didn’t usually understand them.  The service was in Swahili, and much of the music was in Chigogo, the language of the local tribe, the Wagago.  Almost everyone in attendance participated with some form of music or dance. The service featured a liturgy of the Word, three infant baptisms, a sermon, and an hour-long going away ceremony for Fr. Daniel.  Parishioners brought forward gifts for the journey, including sugar, flour, colorful cloths, and a half-filled bottle of cologne – whatever each person could afford.  Groups danced their way forward, greeting Fr. Daniel and his wife, some of them several times. The western missionaries weren’t exempt!  It was a joyous and celebratory occasion.   Afterward, we were welcomed as the guests-of-honor for a meal of beef stew and rice.

For the next year, we will be attending parish churches with our students.  It seems we have a lot to look forward to!

Most photos of the church service are by Magi Griffin, a missionary from Atlanta working for the Diocese of Central Tanganyika.  Thank you, Magi!