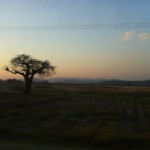 Egypt - our first view of Africa. It was too dark to take a picture of Tanzania. Click on the images to enlarge

It was Wednesday evening after dark when we flew into Tanzania and saw the country for the first time. And the first thing we noticed was that it was very dark! Unlike flying into US cities where dense grids of orange lights sprawl around the airport at night, lights in Tanzania were more spread out, fewer innumber, and generally whiter. The guesthouse where we stayed the first night

It meant we didn’t get a good view of downtown Dar es Salaam when we arrived, but we did have an incredible view of stars – a view that is even more spectacular out at Msalato Theological College’s campus. But south of the equator all the stars are different, and it was a strange sensation to find that even the sky was unfamiliar in our new home! The bus stop in Dar es Salaam, ready for the long journey to Dodoma

We spent our first night at a Roman Catholic guest house and the accommodations were quite nice. We had our own room and Western-style bathroom. Sleeping under mosquito netting is kind of fun. It feels a little like being in one of the forts we made out of sheets as children – like indoor camping! Or like fulfilling childhood dreams of having a bed with a canopy. An open-air market including refrigerators, beds, and other furniture

The next day, Thursday, we had our epic and beautiful eight hour bus ride from Dar es Salaam to Dodoma. We took about 500 pictures in total, and so we will be putting together a bigger photo gallery very soon. Shops along the roadside between Dar es Salaam and Morogoro, the halfway point to Dodoma

One thing that immediately struck me was how much business and activity takes place outside. We drove past an open-air furniture store and I was baffled. I first thought, “But what happens to the sofas when it rains?” But when the dry season is eight months long and has an average rainfall of 0 inches, that’s not a concern. We saw all sorts of open air stores, selling everything from furniture to mattresses to household appliances! A view from Morogoro, the stopping point between Dar es Salaam and Dodoma)

As we rode west we watched the landscape change from green coastlands to open grasslands to dramatic mountain ranges. We came into the Dodoma region as the sun was setting behind mountains and plains dotted with Baobab trees. It was once again fully dark when we arrived in Dodoma, so you will have to check back on our next post to see the city and our new home by the light of day! Elizabeth returning from her first non-Western toilet (Choo in Swahili) A Baobab tree as the sun sets in the Dodoma region