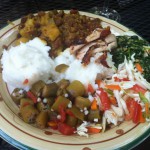 Ugali, coconut beans, and other Tanzanian Food cooked by the Steffensens

Elizabeth and I recently enjoyed our first taste of traditional Tanzanian food.  And we loved it!

Deacon Leslie Steffensen, her husband Kirk, and their children, Greg, Henry, and Charlotte invited us to dinner in their Virginia home to tell us about their experiences at Msalato Theological College.  They lived there during the 2006-07 school year, doing similar work to what Elizabeth and I expect to do there this year.

The Steffensens served us a traditional Tanzanian meal.  The staple food, ugali – consists of cornmeal boiled to a thick consistency and served like mashed potatoes.  To eat ugali, you mold it into the shape of a bowl and scoop up sauces, stews, or meat with it.  (Though Tanzanians usually eat with their hands, we opted for fork and knife for now).  Leslie cooked a bean sauce featuring fresh coconut that she carved using a traditional Tanzanian coconut carver.  She also served chicken, bananas, okra, and other traditional foods.

After dinner the Steffensens showed us a slideshow of their adventures in Tanzania, and gave us many pointers.  Deacon Leslie taught many of the same classes Elizabeth will be teaching, and Kirk set up the computer network that Ben will help maintain.

After dining with the Steffensen’s we are more excited than ever to travel to Tanzania!