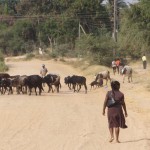 Photo: The road to Msalato Theological College from Dodoma

We have reached our fundraising goal, and are ready to fly to Tanzania this Tuesday, August 21!! We want to thank all of our exceptionally generous donors whose gifts will allow us to teach and serve in Tanzania!  We have been struck by just how much support we received not only financially but also in offers of counsel, prayers, and encouragement.  Thank you!