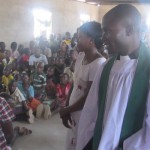 When Father Peter Fumbi graduated from Msalato Theological College last year, he immediately set out to spread the good news of Jesus Christ.  He did such a good job that he came back (just four months later) to ask for help baptizing the multitudes that had flocked to his church.  He said there were a few dozen waiting to be baptized. An Older Woman is Baptized

Three priests and deacons who teach at Msalato set out for Peter’s village.  When they arrived, there were actually 240 people in three different locations – adults and children — waiting to receive the waters of baptism. So much water was splashed around that servers had to continually mop the floor.  Though we couldn’t be there, I imagine the scene was a lot like the mass baptisms recorded in the Book of Acts – where many felt compelled to receive new life with Jesus Christ.

Soon after the baptism, we, along with 50 other missionaries, met with Bishop Mdimi Mhogolo, the bishop of Central Tanganyika, for a bible study on baptism.  He reflected that baptism was the one tangible, visible sign that marks each of us as Christians — from Tanzania or from halfway around the world in the United States.  Baptism, no matter who we are or where we live, is a participation in the death and resurrection of Jesus Christ. Peeking In: No room in the church Just Some of the Newly Baptized

It was not, I think, by coincidence that the next day, we received the parish newsletter from Father Andrew Sloane, the rector of St. Paul’s, my home parish in Washington, D.C., which was also preparing to baptize new members into the Body of Christ. Fr. Sloane wrote in part,

Whether we like it or not, we are also in relationship with all the others who have been baptized, not just in this world and in this life, but with all those countless millions who have gone before us in the life of Faith; “here they all come”- and what a motley crew of saints and sinners they and we are. We don’t choose our supernatural families any more than we choose our natural family. They are a given if we are in Christ, we are members one of another, “the whole company of heaven”, and we are deeply bound to one another in this world and the next because we are sealed and claimed as Christ’s own. As I have often said, “no Christian soul ever stands alone”.

That family – our family – has many new members today from around the world.

Photos Courtesy Rob and Jeannie Reid, missionaries from Canada who are teaching here at Msalato