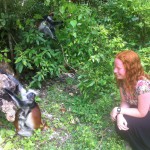 I thought I would describe some of the adventures we have had over here with local animals. We saw all sorts of animals during the last month while we were travelling in South Africa and Zanzibar, but we’ve had plenty of interesting encounters here in Dodoma, as well.

From the first day we arrived in our new house, we discovered that we had roommates. We met a little lizard whom we have named “Steve”. It turns out that Steve has a lot of family members, all also named Steve (or “Baby Steve” if they are very miniature). I love our lizard roommates, and I really love that they eat mosquitos! Also within the first month or so, we had an unexpected visit from a next-door neighbor – a cow! We have this lovely, welcoming grass inside our fence, and so a local cow wandered all the way around our fence until she found the way in. It was a lot harder to help her find the way back out again. My attempt at banging pots and pans was not enough to deter her from her delicious meal. Eventually a student helped us chase her out with a mop. Other animal guests have included birds and bats in our roof, lots of insects, and even a neighbor’s goat, who spent an afternoon tied to our tree.

Then during our recent travels we had two opportunities to hang out with monkeys – once with squirrel monkeys in South Africa, and once with red and blue colubus monkeys in the forest in Zanzibar. In South Africa the monkeys were in a zoo, but it was an interactive exhibit. As you can see, I was very excited!

On our way to stay with friends in Grahamstown, South Africa, the highway was bordered by several game reserves, and so we saw springbok, wildebeest, and even zebras! But perhaps my favorite surprise animal encounter was on Christmas day, just east of the southern point of Africa. It was a beautiful day and we were spending it at the beach. It was really lovely, but I confess I was feeling a little sad because it didn’t feel quite “Christmas-y” to me. But suddenly as I sat there, a pod of dolphins swam into the bay and began jumping and splashing around. Awesome! So no white Christmas, but I got a dolphin Christmas instead. That was a pretty excellent gift!