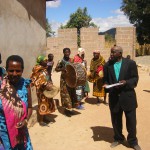 Last Sunday we spent the weekend at Chisichili village, about an hour southeast of Msalato. Chisichili village is the home of our friend Robert Jacob, a first year theology student who does gardening for us. Robert’s father is the pastor of the parish, where he leads worship for three different congregations.

We travelled by dalladalla (local van/buses) and car to get to the village, and once we arrived we got a tour of the area. Chisichili village gets its name from the large Baobab tree that grows there. “Chisichili” in the Gogo language means the seeds that come from this tree. We saw the tree itself, and the crops, homes, and surrounding hilly countryside in this pretty area of the country. There are more pictures from our walk in the gallery at the bottom of the page! The baobab tree that gives Chisichili village its name

Robert’s family was very gracious in hosting us from our arrival on Saturday afternoon until our departure later the next day. We spent the afternoon visiting with them, especially getting to know Robert’s father, who was a student at Msalato 10 years ago, and the parish catechist, the family’s next door neighbor and close friend. Spending time with Robert, his father, and the parish catechist

Cooking over a single charcoal burner (called a jiko) is a time consuming activity, and so we had a lot of time while dinner was being prepared to watch the local children playing around the church, and see some of the older children doing their choir rehearsal. It was full dark by the time we had dinner, and it’s just past the new moon, so the stars were incredible! We ate dinner by the light of a battery powered electric lantern. Without much electricity, bedtime is early in the village – usually around 9pm. We had been invited to participate fully in the worship service the next morning, and it gave us a chance to really practice our Swahili. Ben read one of the lessons and worked hard with Robert to practice so that his Swahili sounded great. Elizabeth had been invited to preach, her second time to preach a sermon in Swahili! (The first time was the week before, and we are preparing a video with subtitles which we will post soon!) The service was very lively and energetic, with lots of singing and excellent dancing from three different choirs. The youth choir sings and dances before the first reading

It was a great trip and we are so grateful to Robert and his family for welcoming us. It was our first time to spend the night in a village, and it really allowed us to see and experience more of village life than you get from a busy Sunday morning church visit. We were thrilled to make new friends and meet more of our brothers and sisters in Christ.